High cholesterol numbers, i.e., anything over 200, can be a serious indicator of inflammatory arterial disease - possibly leading to heart disease. Cholesterol is a waxy, fat-like substance that is found in all cells of the body. It has many important functions such as producing new cells. However, high cholesterol readings are an index of your potential for heart disease. You use cholesterol to make hormones, Vitamin D, and substances that help you digest foods. Your body gets cholesterol from two sources: from the foods you eat and from your liver. Although many foods contain cholesterol, your liver produces up to 80% of what you need.

Just like oil and water, cholesterol and blood don't mix. Cholesterol is fatty and blood is watery. High cholesterol numbers are a measurement of the amount of this fatty substance floating around in your bloodstream.

Cholesterol travels through your blood attached to a protein. It is carried in small packages called lipoproteins. The packages are made of fat (lipid) on the inside and proteins on the outside. Depending on the amount of protein there is compared to fat, lipoproteins are either high, low, or very low density.

Two kinds of lipoproteins carry cholesterol throughout your body. It is important to have healthy levels of both.

LDL (low density lipoprotein) cholesterol is sometimes called "bad" cholesterol because it can cause a buildup and blockage in your arteries. LDL is mostly fat with little protein.  The higher the LDL cholesterol number in your blood, the greater chance you have for getting heart disease.

Your chance of getting heart disease is lower if you have high HDL cholesterol numbers.

What is high blood cholesterol?

Too much cholesterol in the blood, or high blood cholesterol numbers, can be create a greater chance of getting heart disease. It is diagnosed by a simple blood test, which can be broken down into Total, HDL, LDL, and Ratio counts.

There are no symptoms of high blood cholesterol, so many people are unaware that their cholesterol numbers may be too high.

Plaque can stop or slow the flow of blood to your heart. The coronary arteries function to carry blood to the heart. When these are narrowed, oxygen-carrying blood is decreased. This is called coronary artery disease (CAD).

A common sign of CAD is chest pain known as angina. Angina happens when the heart does not receive enough blood and oxygen.

Some arteries thinly covered with plaque can rupture, releasing fat and cholesterol into the bloodstream causing the blood to clot. A clot can obstruct the flow of blood in your arteries causing angina or a heart attack.

By lowering your cholesterol, you decrease the chances of plaque bursting and causing a heart attack. Lowering cholesterol levels may also slow, reduce, or stop plaque buildup.

And fiber does the trick!

Dietary fiber binds cholesterol and bile in the digestive tract, preventing their reabsorbtion and re-circulation. If less cholesterol is absorbed, its level in the blood goes down. The liver makes bile from cholesterol and if more bile is lost in the gut, the liver will use up cholesterol to replace the bile, again resulting in lower cholesterol  levels.  More and more researchers are becoming believers in the importance of dietary fiber and its role as our first line of defense against high cholesterol. 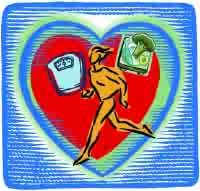 A study published in the Journal of the American College of Nutrition  (1998;17:601-608), included sixty-six men ages twenty to forty-five. Each of them consumed cookies containing one of three different fibers: oat bran, psyllium or wheat bran. In addition, the researchers counseled all the men on ways to reduce the amount of fat in their diets and encouraged them to eat less meat.

After eight weeks, those who ate the oat bran cookies had reduced their LDL, or "bad" cholesterol levels by an average of 26 percent. Those in the psyllium group experienced an almost 23-percent drop. And, although wheat bran is not regarded as a fiber of much value in lowering cholesterol levels, even those in the wheat bran group saw a lowering of about 8 percent in their blood stream levels of LDL.

Other than fiber, the researchers found no significant differences in the eating habits of the three groups of men.

Disclaimer: The entire contents of this website are based upon the opinions of Dr. Steven Shochat, unless otherwise noted. The information on this website is not intended to replace a one-on-one relationship with a qualified health care professional and is not intended as medical advice. It is intended as a sharing of knowledge and information from the research and experience of Dr. Shochat and his community. We encourage you to make your own health care decisions based upon your research and in partnership with a qualified health care professional.

* These statements have not been evaluated by the Food and Drug Administration. This product is not intended to diagnose, treat, cure or prevent any disease. If you are pregnant, nursing, taking medication, or have a medical condition, consult your physician before using this product.

Link to Us - Contact Us High-Fiber-Health.com Dr. Steven Shochat Copyright 2004-2015